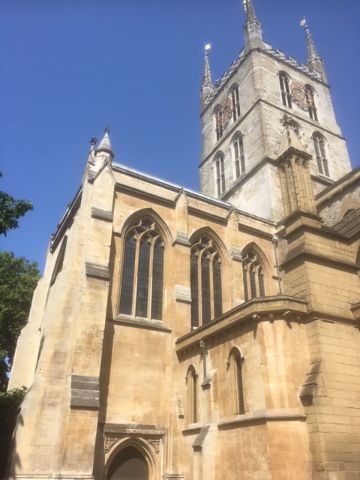 The visit started on the 9:09 from Edenbridge. After the usual greetings we boarded the train and joined the morning commute. There were a couple of last minute cancellations so the overall group size was 11. On arrival in London we walked through Borough Market to the Southwark Cathedral cafeteria, where teas, coffees and muffins were consumed. I have a close affinity with the Cathedral as I was born in Guys Hospital, lived close by and was christened there on 21st March 1951.

We entered the Cathedral and after purchasing a £2 paper guide found that a personal guide was available and willing to give us a guided tour, which we joyfully accepted. We spent some time walking up and down Lancelot’s Passage [a stone passageway adjacent to the Cathedral] where the names of every church in the diocese is displayed. We each found our own church named there. Inside the Cathedral we were treated to a complete tour following the suggested numbered 1 – 16 route. Amongst the very interesting things we saw and had explained were the tomb of John Gower [poet to Richard 11], the Peter Ball carving of Virgin and Child, the Harvard Chapel which commemorates John Harvard [like me a Southwark boy] who was the chief benefactor of Harvard University in America, the 1520 high screen alter, the Nonesuch Chest, the diamond jubilee window, the tomb of Bishop Lancelot Andrews, Shakespeare’s Memorial and window, the Marchioness disaster Memorial, the medieval roof bosses, and finally my favourite Font! There has been a place of worship on the site since 606, due to the vicinity of the river crossing. It was previously known as St Saviours Church and was made a Cathedral in 1905, when the diocese of Winchester was deemed to be too large. 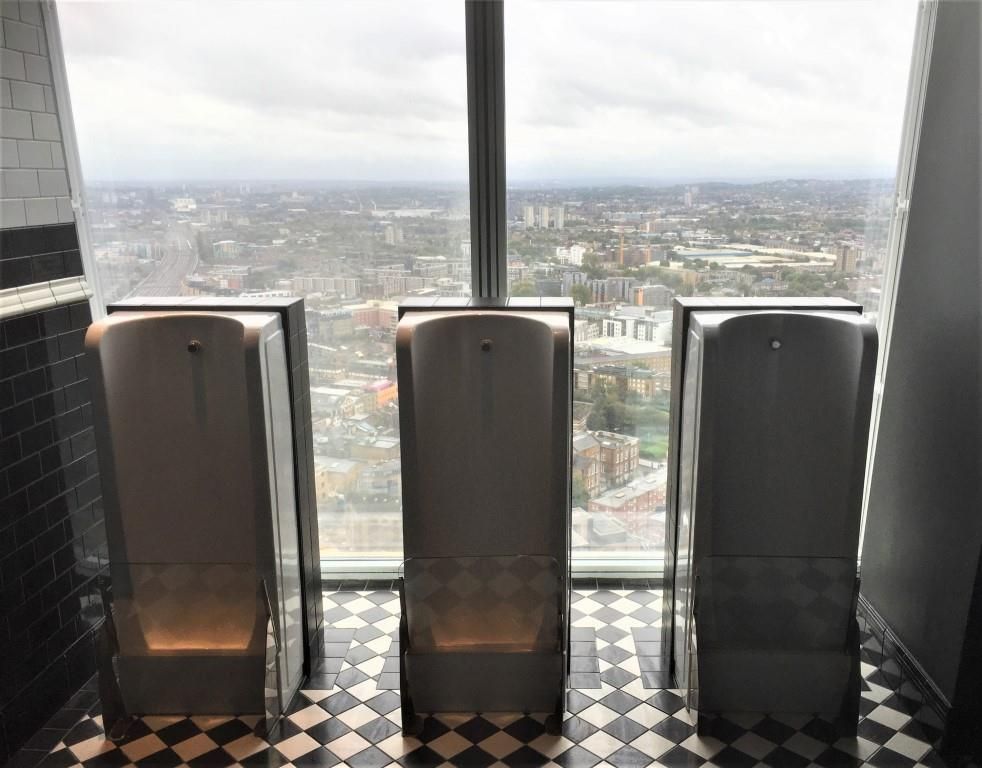 We then took a short walk through Borough Market past the plaque commemorating my brother, placed on the lamppost outside his favourite pub, the Market Porter, then on to the Shard. Entrance into the Shard is free if you enter from St Thomas Street and go to the 32nd floor. We then each enjoyed the spectacular views across London from NSE&W, whilst partaking of a drink or two in the sumptuous surroundings. No visit to the Shard is complete without a trip to the unique toilets [refer to photograph] where panoramic views of London can be enjoyed whilst doing the business!

We all were so relaxed that we did consider spending the rest of the day there, but no, we had to move on to HMS Belfast. 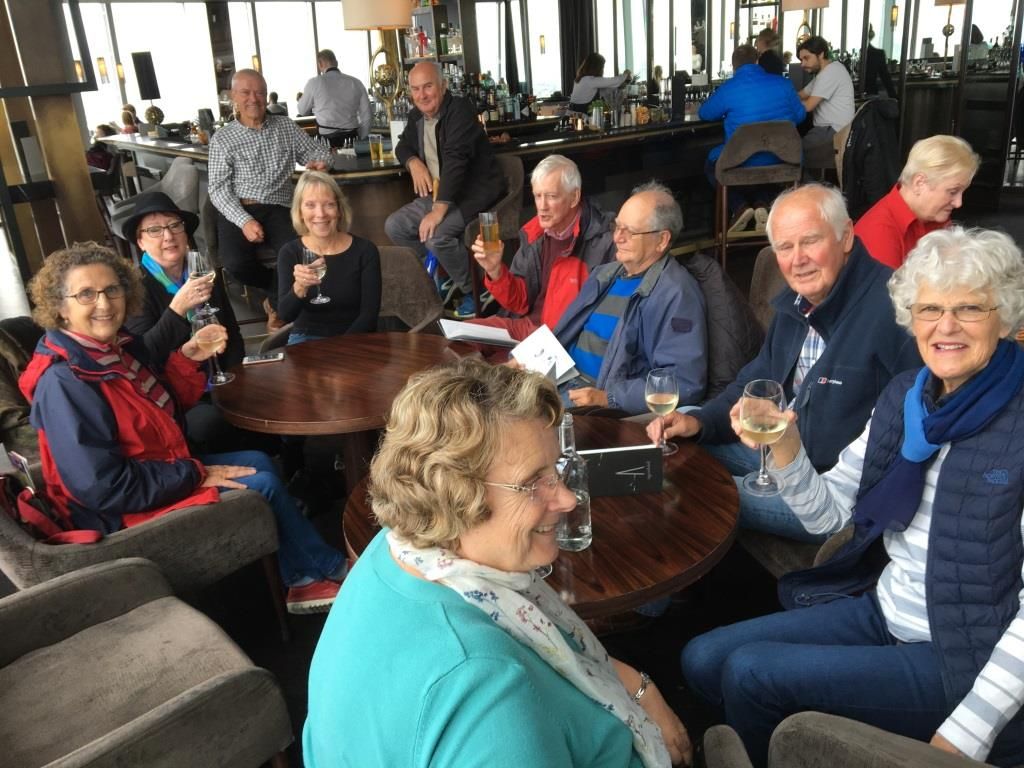 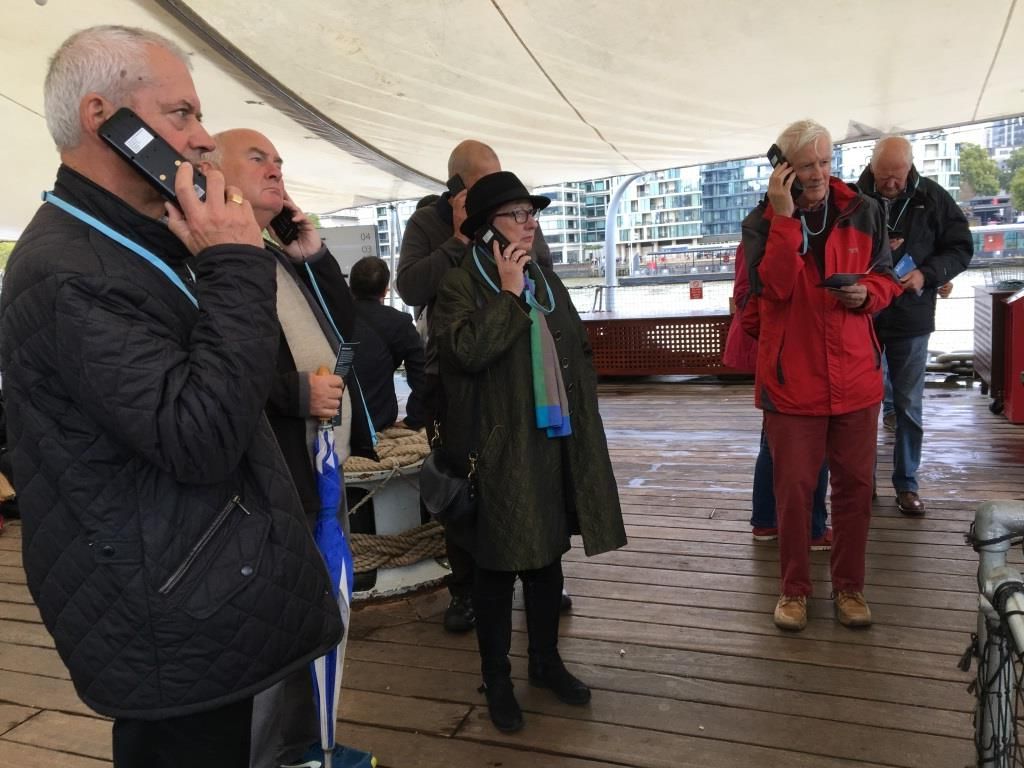 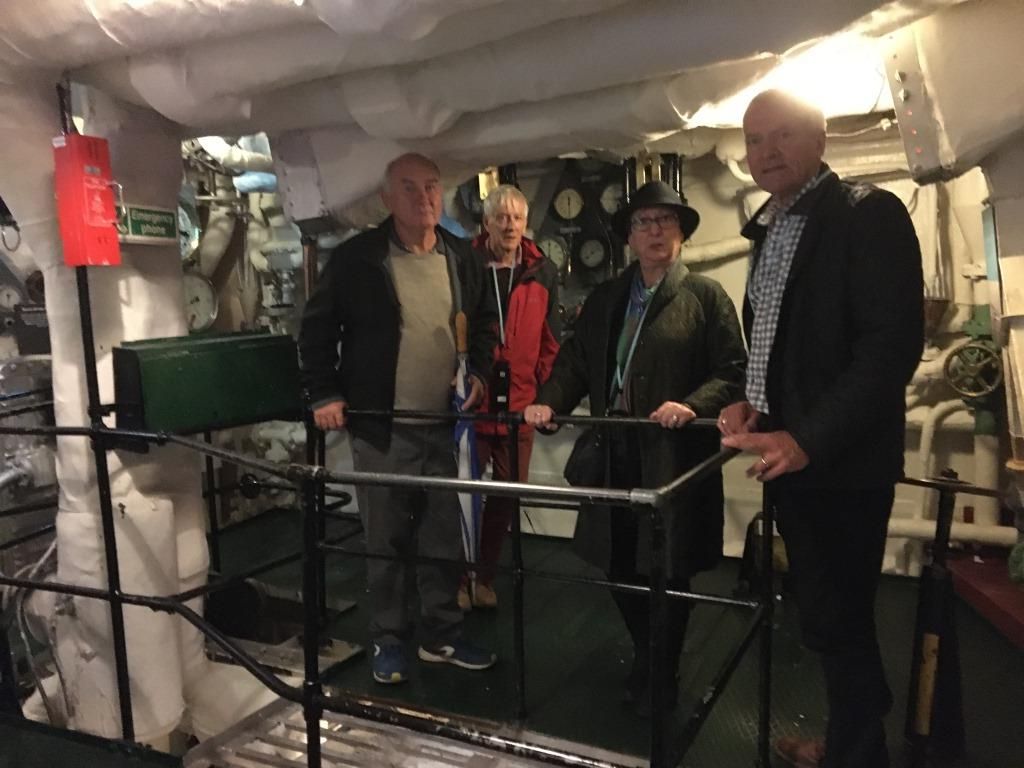 HMS Belfast is a light cruiser and was the first ship in the Royal Navy to be named after the capital city of Northern Ireland. She was initially part of the British naval blockade against Germany, then saw action escorting Arctic convoys to the Soviet Union. During 1943 she played an important role in the sinking of the German warship Scharnhorst and in June 1944 took part in Operation Overlord. We spent a full two hours on an audio walking tour around the ship, getting lost a number of times going up and down stairways into engine rooms, boiler rooms, carpenters’ shops etc, seeing the full paraphernalia of ship life. If you haven’t spent time on this ship, we thoroughly recommend it. To see how the 800 plus navy sailors had to fight a war whilst in the cramped and claustrophobic conditions of the ship is a testament to their courage, morale and comradeship.
After the very enjoyable trip we had lunch in one of the restaurants in Hays Galleria and then went home on the 16:07 from London Bridge at the end of a varied entertaining and interesting day.