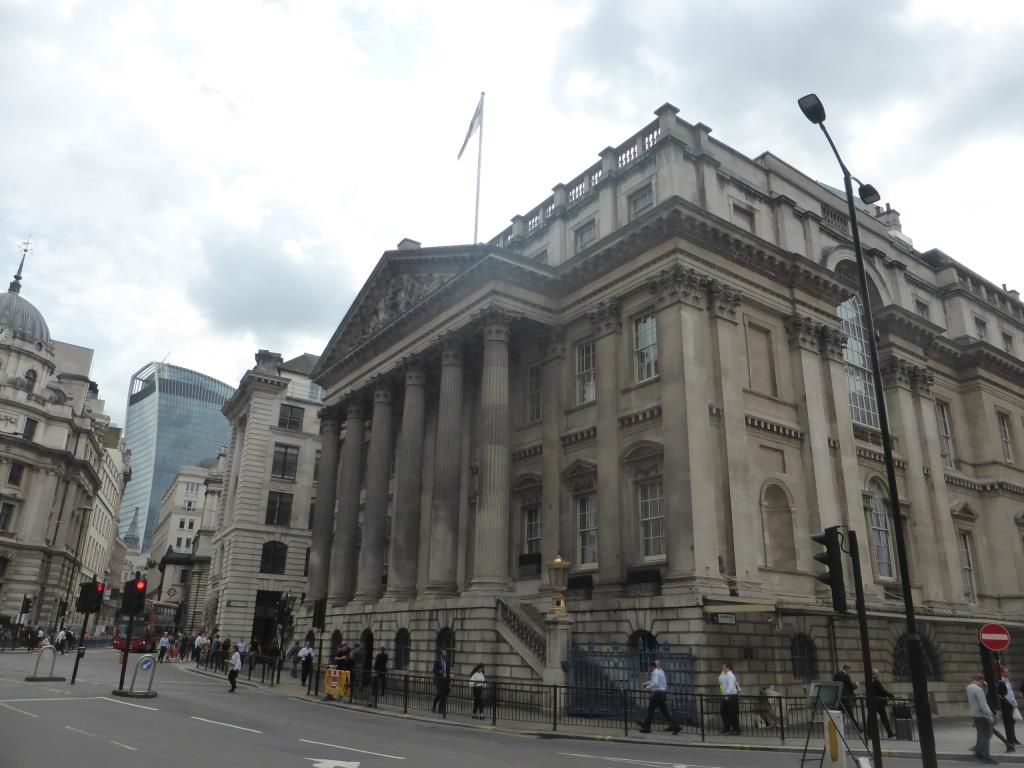 The original programme was to take a group to visit the Mansion House - home of the current Lord Mayor. Enquiries revealed that the tour would take only an hour, so additional activities were undertaken to maximise the value of our London trip. A visit to St Stephen's church, next door to the Mansion House was planned and, using a powerful City clerical connection, a brief talk by the Rector was arranged.

This was the logical end of the tour but, in the same street, are Walbrook, an important museum of Roman remains dating to 3rd century A.D, and a Mithraeum - temple of the god Mithras. It is in the ground floor and basement of Bloomberg's European HQ. It has the additional merit of free access. Some tickets were obtained for this optional extra, with a take up of roughly half of our party
Our party totalled 21 and we took a zig-zag route to Walbrook where we had the obligatory coffee stop.

At the agreed time, we presented ourselves at the Mansion House - the official residence of the Lord Mayor of London since 1754. We entered through the Mayor's private entrance where, after tight security checks, we met our guide, John Davies, Keeper of Walbrook Hall. John turned out to be an accomplished guide with a Welsh sense of humour which went down well with the group. In contrast with the Guildhall, which we toured about 3 years ago, where the impression was of plain walls, floors and ceilings, the impression conveyed here was of luxurious decoration - carpets, multiple chandeliers in different rooms, ornately decorated ceilings, and walls in some rooms decorated with part of the contents of the Harold Samuel collection of Dutch and Flemish 17th century paintings, acquired in 1987. The collection consists of 84 paintings by 10 artists, including Frans Hals. 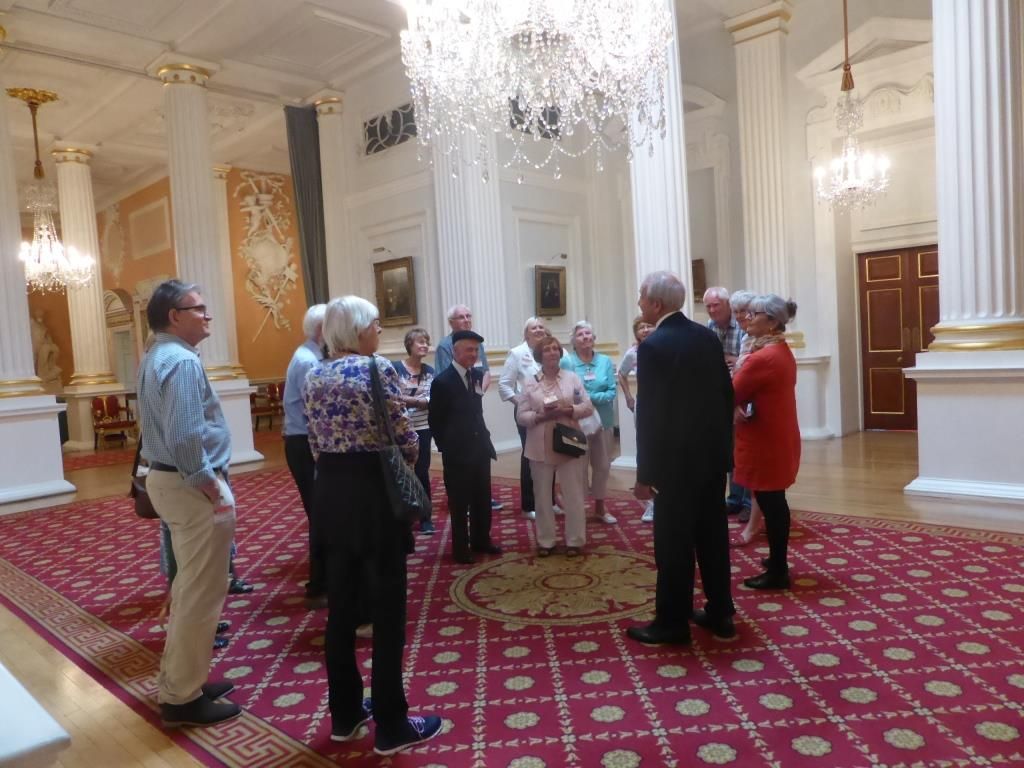 At the entrance hall, we were shown the 18th century Hall Keeper's chair which had a roof and a drawer below the seat to take hot coals or a warming pan to fight the cold. Upstairs was a reception salon with splendid chandeliers. This led to a pair of drawing rooms which were symmetrically identical, even to the point of creating a false door to match the real door of its counterpart. We were shown a chair which cost £10,000. These rooms are used for intimate dinners for up to 10 guests. There are up to 8 full-time chefs since entertainment is very much used in the business of influencing people.day. 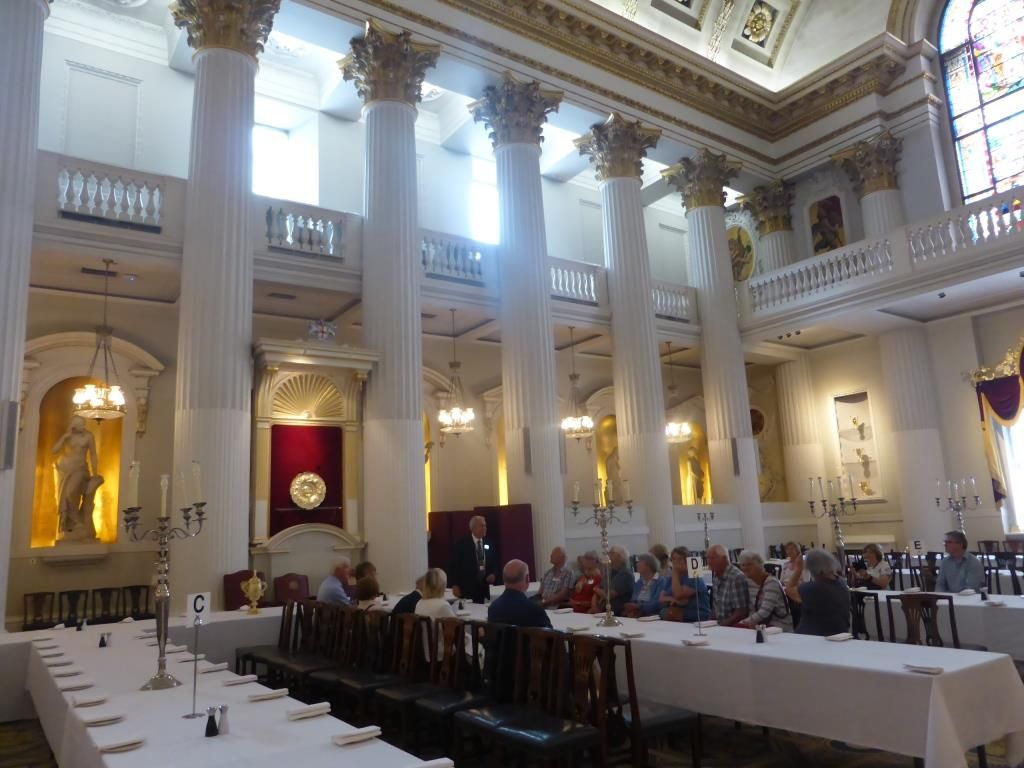 Larger groups, up to 350, are seated in the large Egyptian Hall. This is built in the Palladian style making good use of pillars - 8 each side - and a tall, beautifully decorated ceiling about 30 foot high. Heavy, 7-foot sculptures occupied the space between the pillars. Finally, we were shown the plate collection - one of the largest in the world. One room for golden objects, another for silver. Highlights in the gold room were the pearl sword dating back to Elizabeth 1st - with 2500 pearls decorating both sides of the scabbard; the Fire cup - the only item surviving the 1666 Fire of London;
the collar of esses (SSSS), possibly dating back to Thomas More, acquired in 1535; and the Sword and Mace of the City. In reply to a question concerning the intrusion of a demonstrator to one of their dinners - which hit the press recently- John Davies indicated that it was still under investigation. 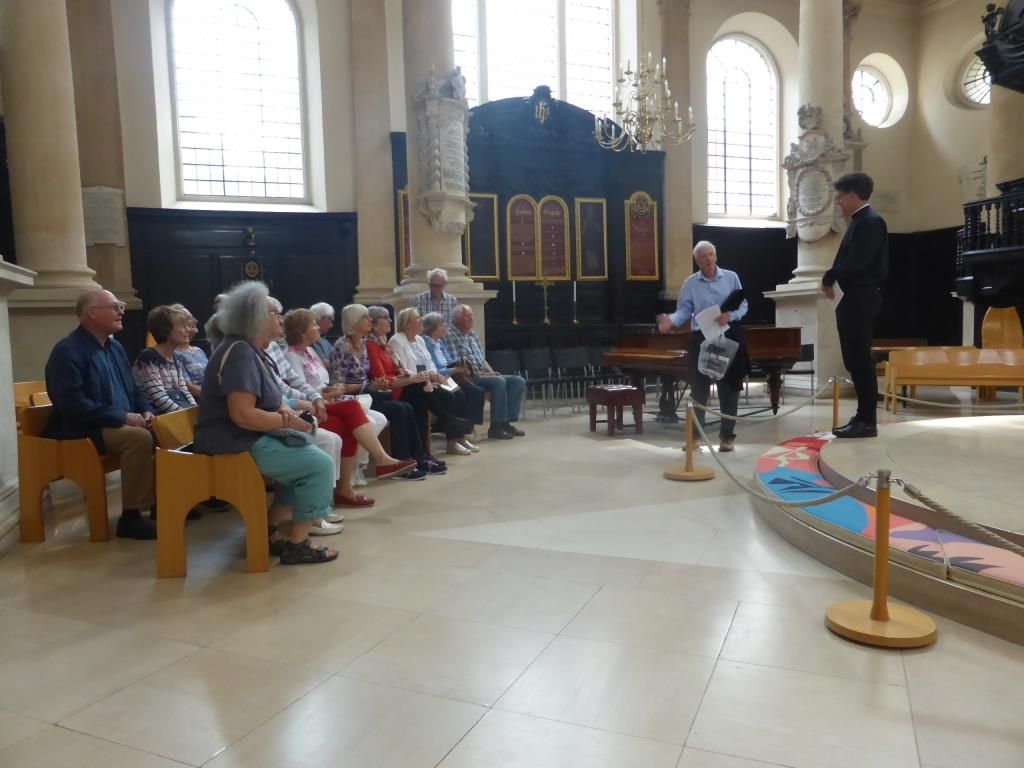 Our tour concluded, we left the Mansion House and entered its local church, St Stephen's, Walbrook. An earlier church on this site was destroyed by the 1666 Fire of London and its replacement designed by Sir Christopher Wren - a local parishioner with a house at 15 Walbrook. He personally supervised the building - starting in 1672 – and used it as a test bed to try out ideas for St Paul’s, which also needed rebuilding. The main idea was a domed roof - St Stephen's is the first English church to get one.

As the Rector, Stephen Baxter, pointed out the shape of the church is a square. However, the domed roof, and the arches and columns near the entrance, give it a circular aspect. This is enhanced by abandoning fixed pews, replacing them with chairs arranged in a circle round the centerpiece - a circular chunk of marble which represents the altar. The Rector does not use the 17th century pulpit at the side of the church but stands at the altar addressing the congregation arranged in a circle round him. He professed mystification as to how his church had been listed in the top 10 English buildings by Sir Nikolaus Pevsner in the last 50 years. It has to be seen to be appreciated. Essentially, it is a single space, beautifully lit by natural light, constructed with light materials giving a feeling of lightness of weight and brightness of illumination. 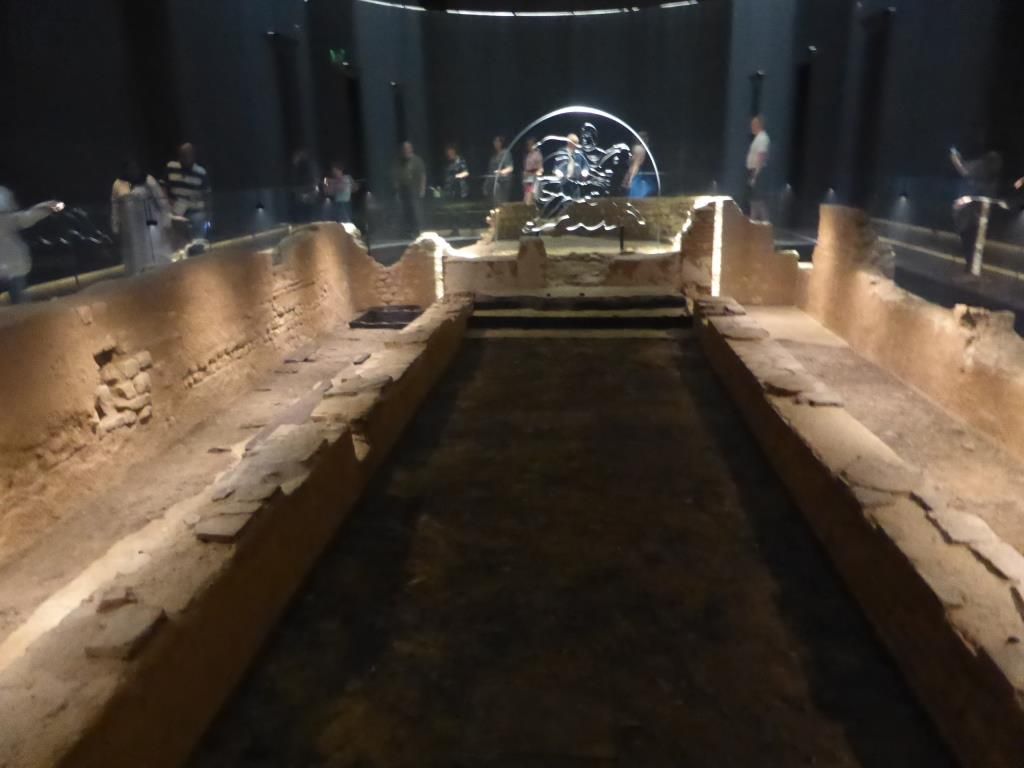 On leaving the church, the party split; some returning home or going shopping, others making for the London Mithraeum. There we were able to descend two levels to see the remains of a 3rd Century temple from Roman times. This was originally found in 1954 and for many years languished in the open at a nearby location. However, as a result of a recent major archaeological excavation, many thousands of artefacts were found and the opportunity was taken to return the remains of the temple, as near as possible, to its original site. Some of the artefacts found were on display close to the entrance, whilst one level down there were explanations of the temple and the Mithraic cult. We were then able to descend a further level to see the Temple and enjoy a brief Son et Lumiere display.

That concluded the formal part of the visits with some finding somewhere to eat for lunch whilst others headed home. It was a fascinating day exploring aspects of the history of London from Roman times up to today’s Lord Mayor’s show. Our thanks to Andrew Shaw-Hamilton who organised it.