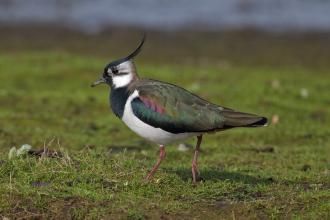 Hello birdy people, just a short report this month as we abandoned our plans to go to Dungeness because of wind and rain and spent a short morning at Sevenoaks Wildfowl Reserve instead. So, although no rarities to report, there was an abundance of greylag geese with the odd Canada and Egyptian goose lurking in their midst. Also whole islands were covered in lapwing … this beautiful iridescent bird of farmland and estuary has three names - lapwing, peewit and green plover. The collective noun is a "deceit of lapwings". This is because it will feign injury and draw predators away if they approach its nest of chicks. I always think about flocks of lapwing illustrating our childhood story books swooping over the scenery like so many black ticks.

The smell of damp earth rose up to greet us from the muddy floor of the reserve as did numerous fungi. One special sighting was a "white saddle" (Stephanie please note). Apparently it has been a bumper year and there were probably more varieties of fungi to be spotted than birds.

Find out more about the Third Age Birders