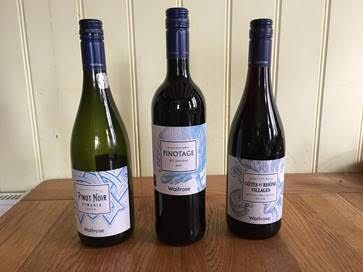 It was with murder in mind that Wine Appreciation Group 1 members were called to attend deepest Cowden, allegedly, to assess the wines on offer from vintners Waitrose's finest cellar stock. The theme was the speciality wines they offer under the blue label, to see if they pass muster.

Members were charged with identifying the wine type and to help them a selection of wines were listed, with the slight inconvenience that the wines were listed in anagram form. So solve the anagram and see which one fits the tasting... simples...! After much sighing and deliberation, anagrams were, by and large, solved. The problem was the wine identification, which perhaps could have been a bit better.

You think they would have learned by now! The wines by Waitrose were mostly thought to be quite good.

However, the clandestine reason for the meeting became clear during the night. Further complications were added as each member was given a Cluedo style ‘victim’ and 'weapon' in order to commit virtual murder. The named victim then had to be subtly persuaded to take the chosen weapon, be it a peanut or book or other item. As the evening wore on the wine consumption increased and ‘live’ members were depleted so there was much less suspicion of unlikely requests to 'just hold this coaster please'. Jan proved to be the ultimate serial killer with several murders under her belt.

There followed another quick quiz on wine topics, then relaxation after the competitive element and just an enjoyment of the wines. Team Brian and Mary were the winners after a further anagram tie-break decider against Peter and Debbie.

Fortunately all ‘murder victims’ had recovered sufficiently to make their way home after agreeing to try harder next time.