The History and Origins of Flamenco 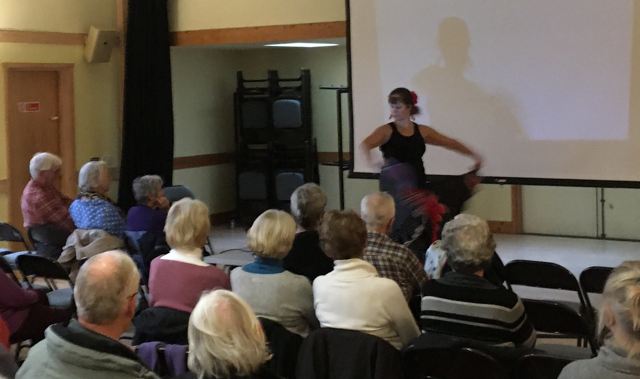 Debbie Lewington began her talk to us by telling us how, as a child with an interest in dance, she had tried ballet and ballroom before discoveringwhat was to become her passion - Flamenco.

In her own highly-amusing way Debbie explained how Flamenco had developed, firstly as unaccompanied song, later with music and finally with dance, since the 13th century.

The original songs were based on Spain’s history of oppression or the personal sadness and passions of its people. The original music was played on a simple drum accompanied with a cane used to beat a rhythm on the floor with the later addition of the (Spanish) guitar.

The dance movements incorporate elements of the culture of Spain’s many colonists and ethnic minorities across the centuries.

Debbie next had the whole audience participating in a demonstration of the rhythmic “counter-clapping” often associated with Flamenco music before talking us through the history and purpose of the beautiful dresses and accessories.

Finally Debbie treated us to a dance which, with its graceful hand movements, poise, passion and rhythm, dramatically demonstrated and showcased all of the features of Flamenco dancing Debbie had pointed out to us in her excellent presentation.